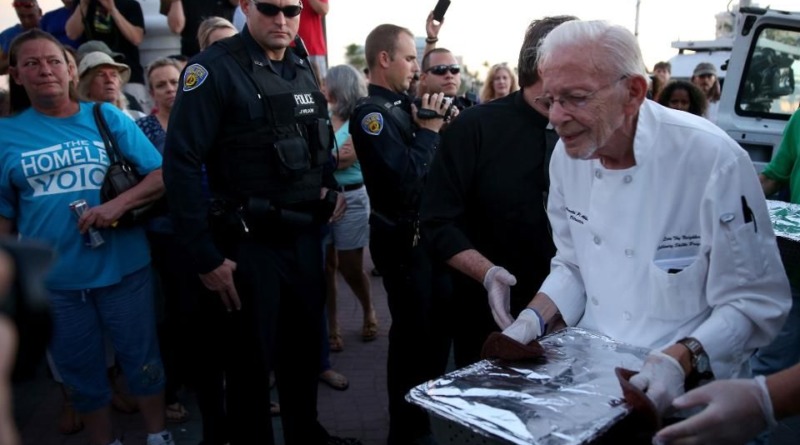 As reported by Forbes.com

In a colorful decision that managed to invoke the Boston Tea Party, Lady Macbeth and Jesus of Nazareth, the 11th U.S. Circuit Court of Appeals ruled on Wednesday that feeding the homeless is “expressive conduct protected by the First Amendment.” The decision revives a challenge brought by a local chapter of Food Not Bombs, which sued Fort Lauderdale, Florida for requiring a permit to share food in public parks.

Thanks to the city’s ordinance, Fort Lauderdale has become infamous for cracking down on compassion. In 2014, police arrested a 90-year-old man and two ministers who were simply trying to share food with the homeless.

“We are very pleased with this ruling, and we look forward to continuing our community organizing in Fort Lauderdale,” Nathan Pim, a member of Fort Lauderdale Food Not Bombs and a plaintiff in the case, said in a statement. “We hope we are one step closer to something we’ve fought for over many years—simply being able to help people without being threatened with arrest by people who should be working with us.” 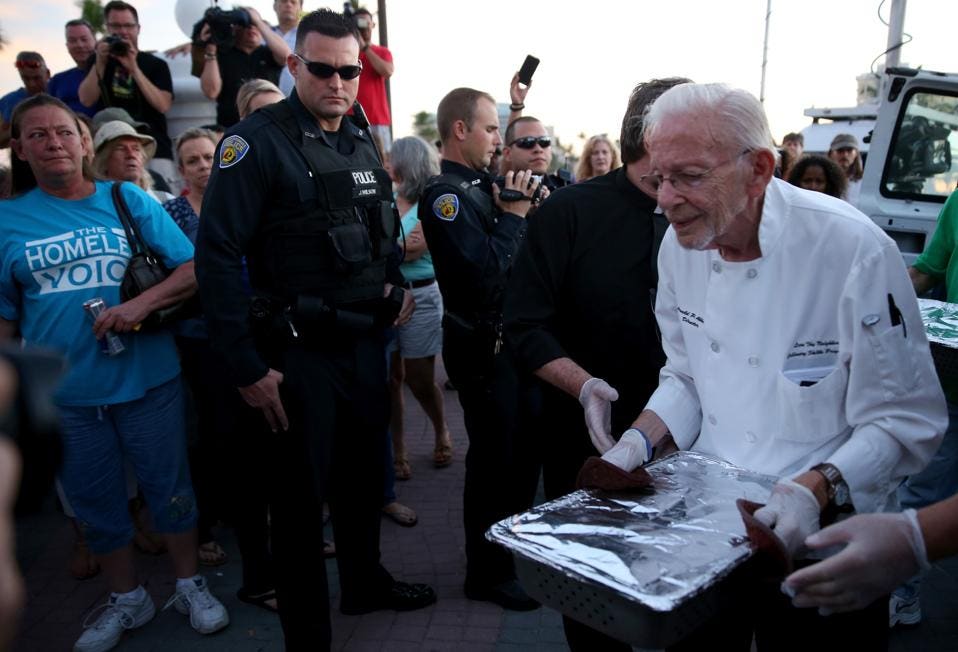 Every week at Stranahan Park in downtown Fort Lauderdale, Food Not Bombs offers free vegetarian and vegan meals to the public. Although many of the participants at these events are homeless individuals, Food Not Bombs is not a charity.


Originally started in the early 1980s by anti-nuclear activists in Cambridge, Massachusetts, Food Not Bombs protests war and poverty. Today, this network of social justice pacifists claims over 5,000 chapters worldwide. Writing for the court, Judge Adalberto Jordan explained that for the Fort Lauderdale chapter, “providing food in a visible public space” is “an act of political solidarity meant to convey the organization’s message.”

But in October 2014, Fort Lauderdale enacted an ordinance that bans sharing food in public parks, unless the hosts obtain a “conditional use permit” from the city. Event organizers also must comply with the city’s regulations for “social services facilities,” which cover “outdoor food distribution centers…used to furnish meals to members of the public without cost or at a very low cost.”

In February 2015, Food Not Bombs sued the city, claiming that the ordinance and associated park rule violated their right to free speech and free association, and were “unconstitutionally vague.” A year later, a federal district court dismissed their case, and held that their food sharing events were outside the scope of the First Amendment because they did not convey a “particularized message.”

But the Supreme Court rejected that line of reasoning more than two decades ago. In its 1995 decision, Hurley v. Irish-American Gay, Lesbian and Bisexual Group of Boston, the High Court ruled that Massachusetts could not force veterans organizing a St. Patrick’s Day parade to include gay, lesbian and bisexual individuals.

Writing for a unanimous court, Justice David Souter remarked that “the Constitution looks beyond written or spoken words as mediums of expression” and that “a narrow, succinctly articulable message is not a condition of constitutional protection.”

If the First Amendment were “confined to expressions conveying a ‘particularized message,’” Souter argued, then the Constitution “would never reach the unquestionably shielded painting of Jackson Pollock, music of Arnold Schoenberg, or Jabberwocky verse of Lewis Carroll.”

With that as precedent, the 11th Circuit ruled that to determine if an activity is expressive or not, “we ask whether the reasonable person would interpret it as some sort of message, not whether an observer would necessarily infer a specific message.” So for the Fort Lauderdale Food Not Bombs case, “the circumstances surrounding an event often help set the dividing line between activity that is sufficiently expressive and similar activity that is not.”


As Judge Jordan noted, walking or sitting down aren’t usually considered “expressive conduct,” but they certainly convey a message in the context of a picket line, a parade, or a sit-in. Likewise, when viewed in their full context, the Food Not Bombs events are “more than a picnic in the park.”

Since the chapter’s events are open to the public, occur against a backdrop of controversial homeless policies in Fort Lauderdale, take place near city government buildings, and involve “tables and banners (including one with its logo) and distribut[ing] literature,” the court concluded that a “reasonable observer would interpret its food sharing events as conveying some sort of message.”

“History may have been quite different had the Boston Tea Party been viewed as mere dislike for a certain brew and not a political protest against the taxation of the American colonies without representation,” Jordan wrote.

Having ruled that Food Not Bombs does  have a First Amendment right to share food, the 11th Circuit sent the case back down to the lower court to determine if the city’s ordinance violates those rights. The City of Fort Lauderdale did not immediately respond to a request for comment.

“The court’s opinion recognized sharing food with another human being is one of the oldest forms of human expression,” said Kirsten Anderson, litigation director at the Southern Legal Counsel and lead attorney on the case. “We think this decision strengthens our message to cities across the country that they need to invest in constructive solutions to homelessness instead of wasting government resources on punishing people who seek to offer aid.”