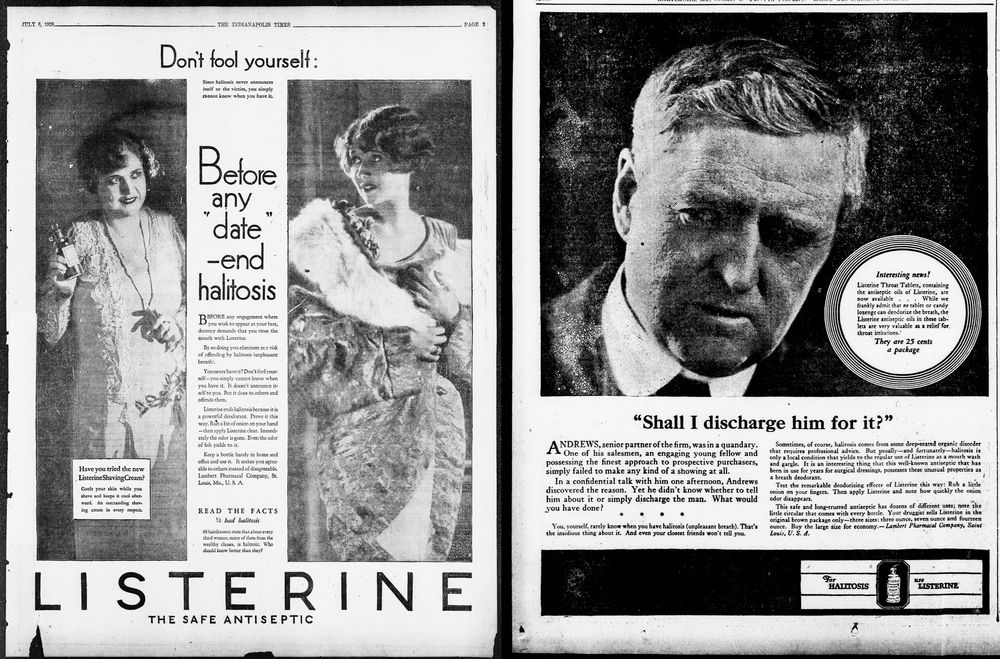 A rare item has hit the auction block: an investment guaranteed to pay as long as people fret over bad breath.

Bids are being taken through Tuesday on a share of royalties backed by Listerine mouthwash sales. They stem from contracts signed 140 years ago by its inventor and still cited in business law classes that require the maker — currently Johnson & Johnson — to pay shareholders in perpetuity.

“It’s a crazy contract,” said Gary Young, co-founder of Royalty Exchange, which is conducting the auction of a single share. “It’s a contract that says this royalty must be paid as long as Listerine is sold.”

While the share up for sale only paid $32,000 last year, it’s a payment that will keep coming as long as — to quote the brand’s slogan — Listerine “kills germs that cause bad breath.” And Listerine is by far the most popular mouthwash — it had a 37% share of a growing $5.2 billion global market for mouthwashes and dentals rinses last year, according to market research firm Euromonitor International.

The mouthwash has been used by more than one billion people in more than 85 countries across the globe, Melissa Munoz, a J&J spokeswoman, said.

The formula for Listerine was invented by Joseph Lawrence, a St. Louis doctor who originally marketed it as a cure for dandruff and a treatment for gonorrhea. He was inspired to develop an antiseptic after hearing a talk by famed British doctor, Joseph Lister, who discovered that disinfectants could reduce post-surgical infections.


There are conflicting reports as to whether Dr. Lister approved of the use of his name on the antiseptic liquid, medical historian Leonard Vernon, a New Jersey chiropractor, said. J&J, on its website, says that speech by Lister in New York also inspired Robert Wood Johnson and his brothers in 1886 to found the company that bears their name.

Lawrence wasn’t having much luck selling Listerine on his own, so he sold the formula to a pharmacist named Jordan Wheat Lambert in return for royalty payments based on sales. The original deal was for $20 per gross — 144 bottles — though that later was lowered to $6 per gross, and is now $6 based on sales of certain ounces of Listerine, since bottle sizes vary, Young said.

One thing that didn’t change in the contracts was that the royalties would be paid to Lawrence and his “heirs, executors and assigns” with no time limit listed.

Lambert’s company built the brand into what it is today by marketing it to treat “halitosis,” a word that wasn’t familiar to American audiences but which ads warned could drive away friends and cause a young woman to become “often a bridesmaid but never a bride.”

When Lambert’s company merged with Warner-Hudnut Inc. in 1955 to become Warner-Lambert, the new company sued to avoid paying the royalties, which by then totaled $1.5 million a year. It argued that the contract was based on access to a trade secret for the Listerine formula that was no longer a secret. In a 1959 ruling still taught to law school students, a judge disagreed, saying the obligation to continue paying “is plain from the language of the agreements and is implicit in their terms.”

“It’s one of these cases that stands out because it’s so unusual,” said Elizabeth Rowe, a law professor at the University of Florida in Gainesville who teaches this case to her students. “It’s a cautionary tale for lawyers representing potential licensees because it can be a trap for the unwary.”

Warner-Lambert was bought by Pfizer Inc. in 2000, and then J&J bought Pfizer’s consumer products division in 2006. Throughout all that time, the royalties have been paid — every month for U.S. sales and every quarter for global sales.

Lawrence’s heirs currently split about half of the royalties, Young said. The other half have had a twisted history over the past 70-plus years. Prominent New York real estate broker John Reynolds bought half, then donated it to the Archdiocese of New York, which in turn sold shares to universities, pension funds, hospitals and individuals.

J&J wouldn’t comment on the auction or reveal how many people get a cut of Listerine sales.