MENOMONEE FALLS, Wis. (August 29, 2018) – Maybe they’re in a rush or have something else to do but, for whatever the reason, a survey reveals that 56% of workers say they frequently or occasionally see colleagues leave the restroom without washing up. With this issue, gender seems to come into play since 63% of men frequently or occasionally observe non-washing behavior compared to 49% of women.

It’s not an inviting thought, especially when you consider how frequently coworkers shake hands and the multitude of public surfaces they touch throughout the day.

For those who need a reminder, good, thorough hand washing includes soap, vigorous scrubbing for at least 20 seconds, as well as running water to wash away the bacteria, germs and dirt that accumulate on hands. 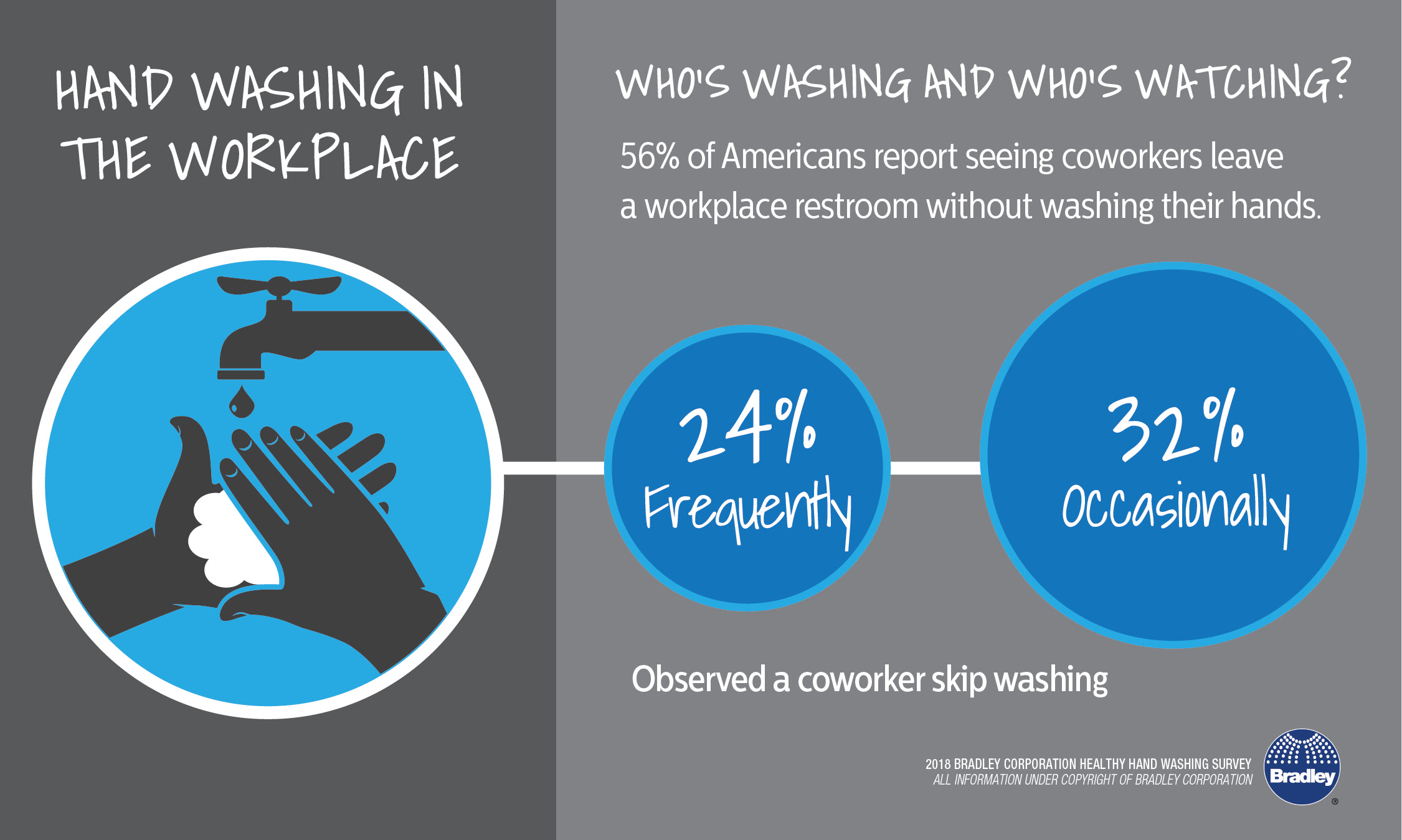 The findings are based on an annual survey by Bradley Corporation, a leading manufacturer of commercial washroom, emergency safety and industrial solutions. The company has conducted its Healthy Hand Washing Survey since 2009.In addition to hand washing, the survey explored workplace restrooms and what might be done to improve them. It found that air freshener is the #1 amenity workers would like to have added, followed by touchless fixtures and hand sanitizer.

Those items stand to reason since 42% say they’ve had unpleasant experiences in their workplace restroom. What have they encountered? Workers most often cite clogged and unflushed toilets, unpleasant smells, paper towels on the floor and restrooms that are old, dirty and unkempt.

Another workplace topic is how to avoid a sick colleague’s germs. 81% say they take conscious steps to evade a coworker who’s ill. To mitigate their exposure, they steer clear of the sick individual, wash their hands more frequently and refrain from shaking that person’s hand.

As the cold and flu season approaches, hand washing continues to be Americans’ first defense against illness. 61% say they wash their hands more frequently to remove germs they may have come in contact with or to avoid passing them along to others. 56% stay home when they’re sick and 50% sneeze into the crook of their elbow.

Survey respondents also identified germy encounters that they feel necessitate hand washing. It’s a must after coughing, handling a sick child and sneezing.

“For employees – and the general public – the condition of restrooms is a litmus test for businesses and establishments,” says Jon Dommisse, director of global marketing and strategic development at Bradley Corp. “Over the years, our survey has consistently shown that the vast majority of Americans believe the condition of workplace restrooms is one indicator of how a company values its workforce. What’s more, 84% expect a business that provides high quality products or services to also have restrooms that provide a high quality experience.”

The annual hand washing survey queried 1,035 American adults online Jan. 2-5, 2018, about their hand washing habits in public restrooms and the workplace as well as their concerns about germs, colds and the flu. Participants were from around the country, were 18 years and older, and were fairly evenly split between men and women (49 and 51 percent).