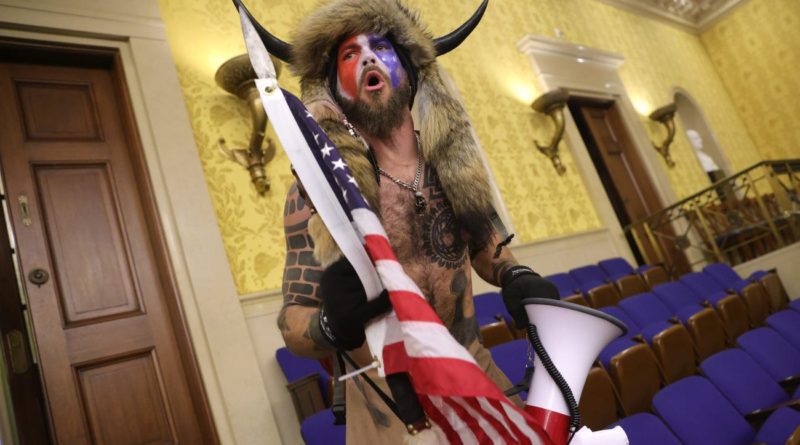 Wearing a green jumpsuit, his head closely shaved, Jacob Chansley sat in a federal courthouse Wednesday just blocks from the US Capitol, where 10 months earlier he emerged as the posterboy of the pro-Trump mob that ransacked the seat of American democracy.

But he was a far cry from the alter ego he assumed in Washington DC on January 6 — the so-called QAnon Shaman who called out, “Time’s up, motherfuckers!” as he stormed the Capitol in a horned headdress, fur pelts and facepaint.

Chansley would leave court Wednesday as the recipient of the longest prison sentence stemming from the January 6 attack.

At the end of a two-hour court hearing, Judge Royce Lamberth sentenced him to 41 months in prison — a term 10 months shorter than what federal prosecutors had recommended after Chansley pleaded guilty to obstructing an official proceeding.

“Although you’ve evolved in your thinking and reversed your thinking in many ways, what you did here was horrific,” Lamberth told Chansley.

Chansley was arrested in Arizona on January 9, just three days after cameras captured him clutching an American flag as he strode through the Capitol in his shaman getup. His image ripped through the internet, turning him overnight into the face of the pro-Trump mob that stormed the Capitol in a bid to block the certification of now-President Joe Biden’s electoral victory.

“He made himself the image of the riot, didn’t he?” Lamberth said Wednesday.

In the aftermath of the Capitol attack, the Justice Department has brought more than 600 prosecutions as part of an investigation federal authorities have described as unprecedented in its scope. Many of the cases have ended with admissions to misdemeanor charges and attracted relatively little attention.

On Wednesday, a phalanx of television cameras came for the occasion of Chansley’s sentencing.

At the court hearing Wednesday, Chansley put on a charm offensive in hopes of receiving what his defense lawyer had requested: a time-served sentence that accounted for the months he has spent in solitary confinement but with no further time in custody.

Flanked by a deputy US marshal, with his lawyer Albert Watkins pacing nearby, Chansley described Lamberth as a man of honor and mentioned the judge’s past military service. Chansley even thanked Lamberth for granting him the organic diet he desired in jail.

“I took a lot of flak for that,” Lamberth said.

“God bless you for it. It made all the difference,” Chansley said, before adding: “I could not have asked God for a better judge.”

Lamberth was struck by the kind words. A day earlier, the appointee of President Ronald Reagan celebrated his 34th anniversary on the federal bench, and he thanked Chansley for comments he said were the “most remarkable I’ve heard in 34 years.”

“I think you are genuine in your remorse and heartfelt,” the judge added. “Parts of those remarks are akin to the kinds of things Martin Luther King would have said.”

In a nearly half-hour address, Chansley invoked Jesus and Mahatma Gandhi as he presented himself to Lamberth as a remorseful, changed man who took responsibility for his conduct on January 6. At one point, describing the strain of solitary confinement, he quoted the 1994 film “Shawshank Redemption” and said, “Hope is a dangerous thing.”

“You really dig when you’re locked up 22 hours a day,” he said at another point in the hearing.

His defense lawyer, Albert Watkins, said Chansley had undergone an evolution in jail. During his first weeks in custody, Chansley hoped to receive a pardon from former President Donald Trump and was disappointed not to receive one, Watkins said.

Watkins said Chansley came to view images from January 6 with a “detached view of a former self” and eventually wanted to be held accountable for his role in the Capitol siege.

“There’s no question his views have evolved,” the judge said.

“Let me guarantee you, you were smart. You did the right thing,” the judge added, on Chansley’s decision to plead guilty. “And you owned up to it today in a fashion that’s unusual for me to see.”