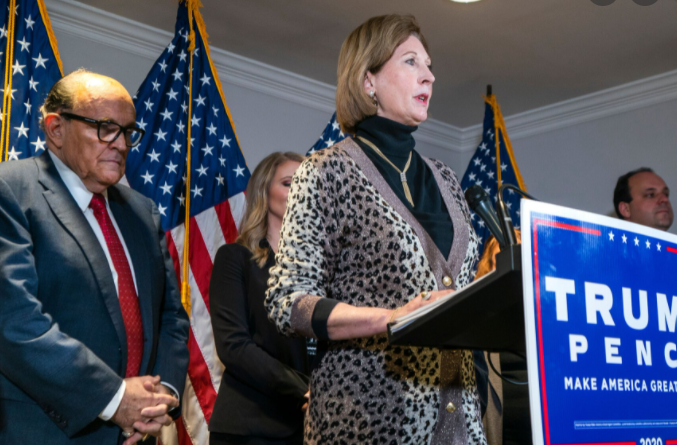 Former Trump campaign lawyer Sidney Powell is suing Verizon in an attempt to block a subpoena issued by the House select committee investigating the Jan. 6, 2021, attack on the Capitol.

The lawsuit, filed by Powell’s attorney Bob Holmes, laid out several reasons why he said Verizon should be prevented from releasing records of Powell’s communications subpoenaed by the committee, local affiliate CBS 11 reported.

The lawsuit argues the records are protected by attorney-client privilege and that the committee has not demonstrated a “valid legislative purpose” for the request.

It further claims that the subpoena violates multiple laws, as well as Powell’s constitutional rights, according to CBS 11.

The lawsuit argues that the subpoena violates the Telecommunications Act of 1996 because it seeks “contents of a communication while in electronic storage” without authorization from Powell or the law, and that it violates Powell’s First Amendment right to freedom of association because, the lawsuit claims, it is overly broad and does not “advance a sufficiently important governmental interest to permit its enforcement.”

The Prosecution of President Trump

The lawsuit also alleges, based on claims that the subpoena lacks valid legislative purpose, that it violates Powell’s Fourth Amendment rights against unreasonable searches and seizures and her right to privacy.

It additionally asserts that the enforcement of the subpoena would violate federal and state laws concerning evidence by depriving Powell of the chance to “review the proposed disclosure and assert applicable privileges,” CBS 11 reported.

The lawsuit concludes with the argument that the enforcement of the subpoena would cause Powell “irreparable harm” and calls for the court to issue an injunction barring Verizon from releasing Powell’s records and to rule that the subpoena is unlawful and cannot be enforced.

A spokesperson for the committee told The Hill they have no comment on Powell’s lawsuit.

This is the latest in a series of legal challenges from Republican leaders and operatives seeking to block the committee’s subpoenas.

The committee, which is composed of seven Democrats and two Republicans, has subpoenaed at least 82 people and organizations in the roughly seven months since it was formed.

The Hill has reached out to Powell and Verizon for comment.